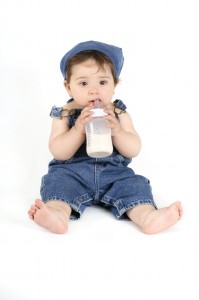 A large clinical study looking at the prevention of fever episodes by prebiotics (specific ingredients to help selected ‘healthy’ microbes grow in your gut) in infant formula has turned up a negative result. The addition of prebiotics made no difference to the number of episodes of kids getting sick. The obvious thing to do right now would be to ask some searching questions of the infant formula companies that continue to claim that their products will prevent your children getting sick.

We are not going to go there though. National and European Authorities have already had their substantial say about that sort of thing. No, this study points to a different future, informing us just how difficult it is to prove that a food is ‘functional’ and just why we should expect to see very, very few health claims cruising the aisles of the local supermarket in the next few years. Here’s the analysis.

Clinical studies tend to be worth taking note of when they have study populations that are big. This is because they tend to give answers that are rather more believable about effects that are in fact quite small. This is the case with a recently published study that looked at the effect of prebiotics added to infant formula on fever episodes at five different study centres from across Europe. Involving well over 1000 infants, we learn that the number of episodes of fever did not differ between infants receiving formula with prebiotics (specifically in this case a blend called Immunofortis, which appears in numerous brands owned by Nutricia/ Danone), and infants receiving formula with nothing added. Comparing this to infants receiving exclusive breast milk, the study also reveals that breast-feeding resulted in a very, very small higher risk of a fever. Note this though >

If you are breast-feeding, please do not stop based on that result. The evidence for the benefits of breast feeding for your child is absolutely overwhelming. Small deviations from the scientific body of evidence do happen and it’s the whole lot of evidence you should take note of… not just one result (which incidentally has some specific weaknesses).

Now, where this study becomes very interesting is when the scientists start to discuss the meaning of the study. Led by Margriet van Stuijvenberg of UMC Groningen, The Netherlands, the team reveal in their analysis a number of intriguing points. For example, they note that their study was performed with healthy infants. This contrasts with the previous studies they quote that involved infants at increased risk of respiratory infections (and that found an effect). The study also revealed a very low rate of fever episodes which they suggest could mean that the study was under-powered.

When we talk about the ‘power’ of a study, that refers, statistically speaking, to the chances that the study actually had to detect the effect it was looking for. A hat-tip to the authors for suggesting this is really deserved. It’s worth looking at why they think this. According to van Stuijvenberg (and company):

“… if much more participants would be necessary to find an effect, the clinical relevance would be very small.”

You can probably draw your own conclusions on that statement. They go on. Finding a very small difference in favour of prebiotic intake after the first 6 months, they then rip into the finding both statistically and noting that it is probably clinically irrelevant. Then, looking at the variation between study centres, they note differences in fever episodes and specifically that breast feeding at some centres seemed to result in higher rates (please, please see my note above). Even more intriguingly they suggest that if your kid is white or happens to be a boy, you might expect a higher number of fever episodes. Happily, if you have a furry pet in the house, you might expect a lower rate of fever episodes. All that appears to be irrelevant of whether prebiotics are given or not.

Do take some care with these observations. I have previously picked over the difference between correlation and causation. I suspect this might be true here too.

What all this highlights is that running a study in the wild (i.e. making it as realistic as possible) also makes finding effects of an intervention, in this case with infant formula containing prebiotics, very hard to pin down. The real difficulty is that, at least in Europe, the regulatory authority, EFSA, has started to ask for proof that a product making a claim works in a general population. This study was performed in a general population and as far as I can tell, was performed very well.

Where it will get interesting is when the general population becomes an unhealthy population. I’m looking at the US and obesity… and there is some really fascinating work going on about that little issue… microbes are probably involved.