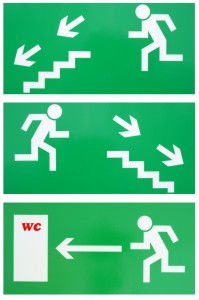 A combination of new technologies and some recent discoveries has led many to point the finger at gut microbes as a predisposing factor in irritable bowel syndrome (IBS). Let’s run this one through to see what it might mean.

Recognise this? ‘Aaaaaaaaaaaaaaaargh!’, run, slam, ‘aaaaaaaaaaaaaaaahhhhhh’, flush, smile. That is the sound of someone with an overwhelming desire to sit on porcelain and let go. For some, all of this is a characteristic of irritable bowel syndrome (IBS) which, if you will forgive my understatement, can really ruin your day, week in, week out. The symptoms are well recognised. And yet, despite affecting as many as 20% of the population, we know surprisingly little about the cause of IBS. Therapies at best only provide transient relief and there is still no universal cure.

There are plausible views that IBS might be caused directly in the gut and specifically be the result of subtle inflammation of the gut wall (other hypotheses are available). There are suggestions, for example, that some develop IBS after infection and gastroenteritis and that residual antigens kick off an inflammatory cascade, resulting in IBS.

Some have also pointed the finger at the composition of the gut microbiota as a whole and asked whether it could be a pre-disposing factor to IBS.

Well, a number of studies have appeared this year that suggest there might be something in this. Technology has been the key here, with some very exciting developments in sequencing technologies, meaning we can now get a view of the gut microbiota in unparalleled detail.

It’s called microbiology by numbers (or technically, microbiomics) and basically involves extracting and sequencing DNA in a sample, piecing it all together and producing an individualised catalog of what’s there.

The idea then is to compare samples from different groups (in our case patients with IBS and others without), and tease out the differences, getting an idea of what might cause what. With such an ecological system, the devil is likely to be in the detail and this approach can really, really get into that detail.

Now, it is not as if this relationship between gut microbes and IBS hasn’t been explored before. Many studies have proposed that different species might or might not be associated with IBS.

It’s just that across these studies no round consensus has ever emerged. This is probably due to the ‘depth’ of analysis, or lack of it, that has previously been possible.

What makes the following two studies important then is both the level of detail described and the agreement between the studies despite one being performed in Finland in adults (Rajilić–Stojanović et al) and the other in kids in Texas (Saulnier et al).

Significant similarities included, for example, an association between Dorea and IBS (which, incidentally has also been associated with stress in an animal study).  As expected, it is not completely clear cut with some significant differences in associations also reported in the studies. In the case of the Finnish study a signature profile of bacteria could be identified to discriminate patients with IBS and those without. Equally the Texan study could also reveal signatures associated with different types of IBS.

An accompanying editorial by Talley and Fodor (published in the November edition of the journal Gastroenterology) gets into a very engaging discussion about all this.

What does all this mean for IBS?

One of the aims of this type of research is to define a set of bacteria that might be diagnostic of IBS. That is to say, a set of microbes that are always associated with IBS. Now, diagnosing IBS is easy. It often doesn’t even require a diagnostic lab test.

On the face of it then, it is fair to ask where the value is?

Again, it is in the detail and specifically in subtypes of IBS. It is entirely possible that a certain set of microbes is related to the diarrhoeal type of IBS; another with constipation etc etc. If, and it is a big if, this is the case, it suggests that therapy might be achieved through some sort of targeted intervention with probiotics, prebiotics, antibiotics or some other approach.

Probiotics and antibiotics have already shown some potential in this area. If these signatures can be identified, (and causality proved) it provides a target for treatment.

We are, however, still a long way from that sort of personalised vision of the future. I have discussed this sort of thing before when the drugs don’t work. These studies are a first step that, more than anything else, illustrate the potential of the technology and its future application.